Electric Current The Easy Way: a very simple and qualitative approach to understanding what electric current is and how it flows.

Watching a number of YouTube videos, I realized there is some misconception regarding the electric current and how it flows. Some people don’t understand what the current is made of and whether it flows from positive to negative or vice versa.

So here I am, trying to shedding some light to clear the obscurity on this subject.

This post approaches the subject in a very basic qualitative way. No formulas and no calculations are involved.

From the Webster Dictionary

Current:
A flowing or passing; onward motion. Hence: A body of
fluid moving continuously in a certain direction; a
stream; esp., the swiftest part of it; as, a current of
water or of air; that which resembles a stream in motion;
as, a current of electricity.

So, current is the flow of something, some kind of material thing like the molecules of water in a river.

But, what is the material that makes the electric current?

Electric current is made of electric charges. These charges have the ability of moving in a medium like, for example, an electric wire. Like the water in a river, charges have to move from a higher level to a lower level of potential energy.

For a river, the higher level of potential energy is the higher ground, and so the water flows from a higher ground to a lower ground, from a mountain or a hill toward the valley below or the sea, or the ocean.

Similarly, for an electric current, charges have to move from a higher ground of electric potential energy to a lower ground.

This seems utterly complicated, and it is. Think if we had to consider the kind of medium and/or the kind of charge every time we need to describe what happens with a current. 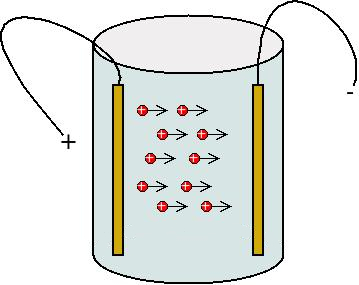 Wait, what we just said? Electrons are charged negatively and protons positively? How do we know that?

Positive and negative are just made up names that we use because it is convenient to do so.

We could have as well said that electrons are positively charged and protons are negatively charged. But, historically, we have defined the polarity of the charges in a certain way and therefore we continue to do so, because we don’t like changes, and we like concepts to be simple.

And yes, it is: too complicated to use it in every day conversations.

Simplification? Sure, let’s do that. Let’s say that whenever an electric current is involved, we will always say that it is made up of positive charges, and that positive charges always go from positive to negative electric potential level. How’s that? Simple enough?

Now doesn’t matter the medium being an electric wire, were the current is made up of electrons moving through it, or the acid solution in a car battery, where the electric current is made of ions, of both positive and negative kinds, creating two different currents flowing simultaneously in opposite directions.

Lesson learned: we like to make things simple. We define the electric current as the flow of positive electric charges in a medium, whatever it is, going from the positive potential level to the negative.

And that’s it. That’s enough for us. With this definition we can address problems involving electric currents always the same way, without worrying what is really happening behind the scenes. This is a very important concept. All about electrical engineering is based on this definition of current. Well… at least part of it.