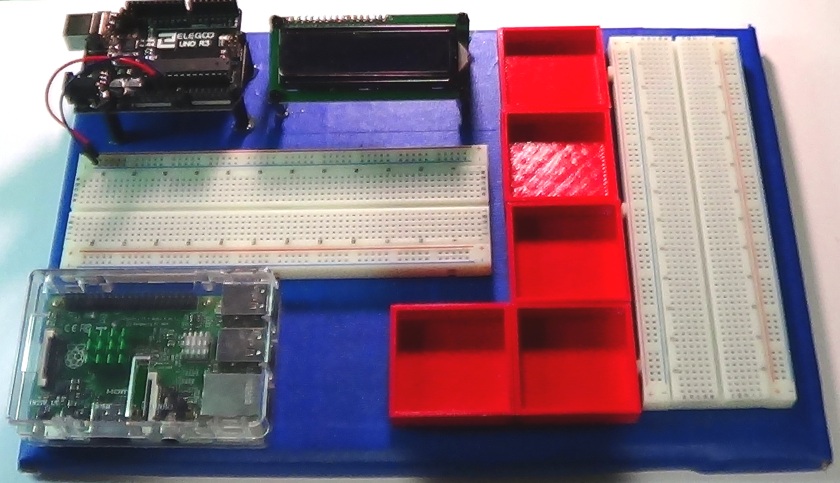 Having a hobby like electronics generates a number of problems, like finding the space where to run the experiments and build your own creations, store all the measurements equipment and tools, and store all the needed electronic components. This has to be done with respect to the necessities of the rest of the family while, at the same time, provide a safe haven where to leave all the equipment and components in use for an experiment in an area where nobody will touch anything, especially if there are young kids around.

My personal choice was to setup a lab area in the basement of my house. Being that a finished basement, I didn’t have much space to fit the lab in, so I had to go with what I had available: a little unfinished corner room.

I built in there a workbench that occupies an entire wall of the space, and put a huge pegboard on its back to hold the bulk of my tools. A shelf built on top of the workbench would hold some of the measurements equipment, while the area underneath it would hold the remaining of the instruments. Other shelves would be mounted anywhere there is a place for them while the wall opposite to the workbench would hold the drawers cabinet with all the small components. For lack of space, I had to place that cabinet right behind the door that gives access to the lab, thus preventing the door opening completely. On that same wall, I built an enclosure for my self built 3D printer, and a bigger shelf system takes the remaining space of the tiny room.

A few small cabinets mounted on casters crowd the floor of the room, while a small white board hangs on the remaining wall. I use the board to do quick draws of circuits and quick calculations, or to hang paper drawings with small magnets.

This is the space that I’ve been using since a while now, and the location from which I plan to record a number of vlogs to show what I do and how I do it, in the hope of generating some interest and create that spark that will allow other people to enter in this rewarding kind of hobby. There is nothing more satisfying then seeing your creations take shape and function, through the amazement of your family and your friends.

Thanks for joining me!