A brief introduction to capacitors: what they are, how they are made, and their basic functionality. A capacitor is an electric device capable of storing energy in the form of electric charges (electric field).

In the most simple form, a capacitor is made of two conductive plates facing each other and an insulator in between, which is normally called a dielectric. The two plates are then attached to wires, that are used to connect the capacitor in an electric circuit.

The schematic diagram reflects exactly the physical nature of the device: 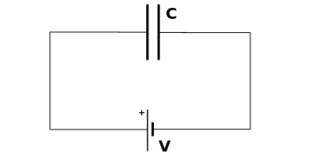 Both during charge and discharge, the ratio between the amount of charge stored on the capacitor and its voltage remains constant. This can be verified experimentally. We define this constant as the capacitance of the capacitor:

Using the above formula, and calculating the work done to move the charges in and out of the capacitor with the help of some calculus, we can determine the energy stored in a capacitor as:

For more information on this subject, please look also to the corresponding video on my YouTube channel.