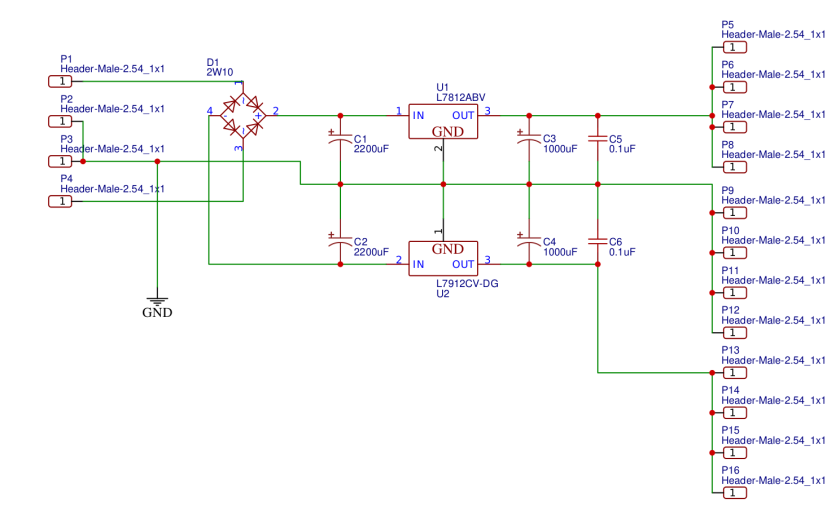 For the new version of the Theremin, I have chosen to use a dual 12V power supply. This will have more flexibility because it will allow me to use more sophisticated units, possibly using op-amps.

The circuit is very basic: it uses a dual 14V transformer (not shown in the schematic) capable of providing 1.5A at its output.

A dual transformer is made up as in the following picture. 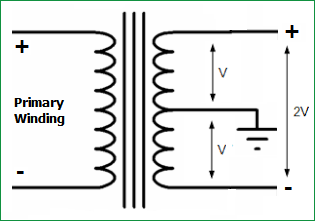 Is has a primary winding that is connected to the AC power supply outlet, and a secondary winding with a center tapped wire that is usually put to ground on the low voltage circuit side.

Voltage between either end wire of the secondary and the center tapped wire is usually the same (with the exception of specifically made transformers), which we call V.

The voltage measured between the two end wires of the winding is instead two times V or 2V.

Sometimes, instead of having a single secondary winding, we have two, carrying the exact same voltage. In this case, we can connect together the two closest wires and consider that as the center tapped wire. Then everything works as the first kind of transformer.

The AC current of the transformer is converted in to a DC current through the usage of a bridge rectifier and the capacitors C1 and C2.

The bridge rectifier converts the sine wave coming from the transformer into a fully rectified wave.

In general, depending on the use of the power supply, we define a maximum value of the ripple that the circuit can handle.

In our case, we need to make sure that the voltage at the input of the regulators never goes below 14.5V, according to the data sheet, otherwise the regulator will not function properly.

The peak voltage provided by the transformer is its RMS value multiplied by the square root of 2, or:

The minimum voltage we can have at the input of the regulator is:

This is the max value of ripple that we can sustain.

To calculate the capacitor necessary to obtain this ripple, we use the following formula:

where f is the frequency of the alternate current which, in the USA, is 60Hz, and Ix is the maximum current that the power supply needs to provide.

However, the Theremin circuit will really not draw 1.5A from the power supply, so we can stay a little conservative, and use the closest value below the calculated one, which is 2200uF.

At this point we can safely say that the voltage on the output of the regulators will be exactly 12V (positive or negative, depending on the output side).

To further help the regulator, and preventing the current through it to go too close to the 1.5A threshold, where the regulator would not work anymore because the ripple becomes too high, we add to the output of each regulator another electrolytic capacitor, this one with a value at least equal to the capacitance value that we did not put at the input side. Since at the input side we put a capacitance of 2200uF instead of 2358uF, we will need a capacitor of at least 158uF.

However, to stay totally safe, I decided to use a capacitor at least 5 times higher, so I used the value of 1000uF for C3 and C4.

And finally, I added an extra capacitor (C5 and C6) to shunt toward ground any RF frequency that would travel back from the Theremin oscillators toward the power supply. A 0.1uF value is what is suggested by the data sheet of the regulator, so I used just that.

Why did I use this capacitor if there was already a 1000uF in there?