Everybody also knows that plastic is a good electrical insulator, as well as other materials such as glass and rubber. 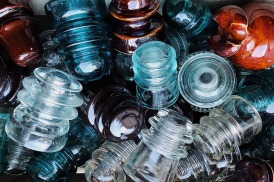 To answer all these question we need to look deeper inside the materials.We know that matter is made of atoms, and atoms are made of protons, neutrons and electrons. Protons and neutrons reside at the center of the atom structure, called the nucleus. Electrons are allocated all around the nucleus, at a long distance from it, relatively to the scale of the nucleus itself.

Based on quantum mechanics, which we are not going to talk in details in this context, electrons occupy bands of energy. The farther bands in the atom are the so called Valence Band and Conduction Band.

The valence band contains all those electrons that allow the atoms to stick together and forming molecules by bonding with other atoms of the same or a different substance.

For certain materials, rather than having molecules, the atoms form what is called a crystalline lattice, which is the case we are more interested in this context. It is worth noting that a new theory, highly based on quantum mechanics, is also distinguishing between actual crystalline lattices and material networks. However, for all the scope and purpose of this context, we will make a simplification and name both of them as crystalline lattices.

(This picture, courtesy of Wikipedia)

Don’t think that electrons move very fast when they do that. Electrons, in fact, move very slowly, but it is the huge amount of them that help creating a measurable current.

Then you would ask: but when I turn the switch on, the light comes out of a lamp instantly. If the electrons move slowly, shouldn’t a lamp emit light only after a while?

Well, yes and no. In fact, the lamp does not light up immediately. It takes a certain amount of time to do that. But that time is so small that for us the event happens instantly.

But I am digressing. Let’s go back to our primary subject.

We have talked about electrons in the valence band and the possibility they have to jump to the conduction band and, thus, helping creating a current if we apply a voltage.

But how much energy do the electrons need to jump to the conduction band?

Here it comes the definition of conductors, semiconductors and insulators.

In the materials called insulators, the gap between the valence band and the conduction band is so high that electrons cannot jump from the valence band to the conduction band, and so they cannot generate an electrical current.
Of course, if we apply a voltage high enough, we can still provide them the energy to make the jump. However, in that case, because of the very high voltage, electrons jump from one band to the other in a disruptive way, causing the material to break. Once that happened, the insulator loose its property and it is no good anymore as such.

In this article, we have talked about energy bands in materials, and how materials behave based on the position of the two highest energy band levels.

We have said that conductors are those were valence and conduction bands are partially overlapping.

Conversely, insulators are those that have a high gap in between the valence and the conduction bands.

And finally, semiconductors are those somewhat in between. For them, the valence and conduction bands are separated with a gap, but that gap is small enough to allow, under certain conditions, for the electrons to jump from the valence to the conduction band. That’s why they perform poorly both as conductors and insulators. However, we will see later on how semiconductors can be of great advantage for us, as long as they are treated in a certain way. They are those that allow us to build all the wonders of modern electronics.